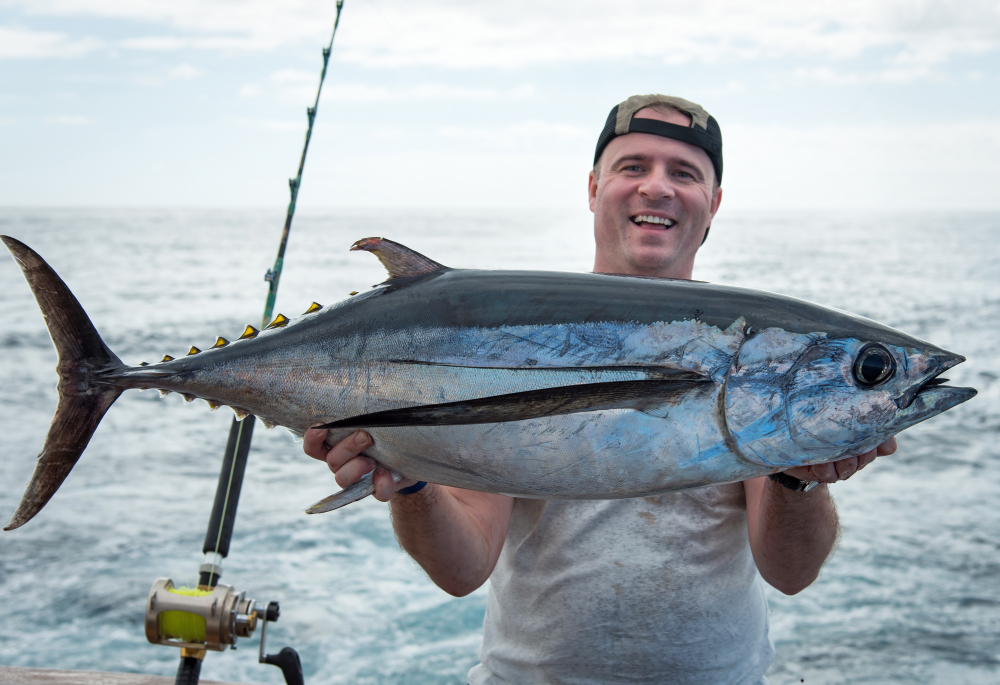 There are nearly 50 different types of tuna, most of which come from the Pacific and Atlantic Oceans. This important food fish is harvested on a grand scale commercially, and several species are famous for its fighting spirit for anglers. This section will look at three of the major types of tuna: skipjack, yellowfin, and bluefin. All three have differing species in both the Atlantic and Pacific Oceans, and so major differences will be pointed out below.

Skipjack: Skipjack tuna do not have scales except on the corselet and the lateral line. Their back is dark purplish blue, and the lower sides and belly are silvery with 4 to 6 very conspicuous longitudinal dark bands, which may appear as continuous lines of dark blotches.

Bluefin: The bluefin tuna has a large, torpedo-shaped body that is nearly circular in cross-section. The fish is dark blue-black on the back and white on the lower sides and belly. On live bluefin, colorless lines alternate with rows of colorless spots on the lower sides. The second dorsal fin is reddish brown.

Yellowfin: Pacific yellowtail grow slightly larger, weighing as much as 440 pounds (200 kg). Atlantic yellowtail only weigh up to 400 pounds (181.4 kg).

Skipjack: Skipjack tuna form schools in the surface water of tropical, subtropical, and warm temperate waters of all oceans.

Skipjack: Skipjack tuna are a pelagic species, which means they mostly live in the open ocean, although they may spend part of their life in nearshore waters. They can be found in surface waters and to depths of 850 feet (259m) during the day but seem to stay near the surface at night.

Yellowfin: Yellowfin is a tropical species, occupying the surface waters of all warm oceans. Larval and juvenile yellowfin stay in surface waters while adults are increasingly found at greater depths.

Bluefin: Bluefin tuna are pelagic, living in the open ocean.

Skipjack and yellowfin tuna live up to 7 years of age. Bluefin live considerably longer, with reports indicating at least 20 years.

Yellowfin: Yellowfin tuna are opportunistic feeders, preying on a wide variety fishes and invertebrates, including those associated with Sargassum, a floating algae. Off the west coast of Baja California, Mexico, and southern California, pelagic redfish, crabs and northern anchovy are important parts of the diet.

Bluefin: Bluefin tuna are voracious carnivores that feed on fish, squid, and crustaceans.

Skipjack: Throughout the year in tropical waters and seasonally, spring to early fall, in subtropical areas.

Yellowfin: From May to August in the Gulf of Mexico and from January to April in the eastern Atlantic Ocean. For Pacific yellowfins, peak spawning’s during spring and fall.

Bluefin: From mid-April to June in the western Atlantic.Information courtesy of NOAA.

Really!  Can Fish Smell?  I still can’t help but wonder why that fish followed my bait all the way up to two inches from it and then turned his nose up while swimming away.  Was something wrong with my presentation?  I spent $22.99 on that special lure. It should taste like steak and lobster for

Lures have one purpose and that is to catch fish.  The mere glitz and glitter of them will not effect the final outcome.  So, a fisherman made lure which works is all that matters.  The cost factor is another prime consideration in the economy of today.   Here I have gathered plumbing materials to make a lure known as a teaser.  The purpose of it is to bring fish to

If you’re an angler who craves excitement and is willing to travel, then here is your bucket list: where to catch a fish bigger than you around the world.

What Is Tuna Fishing All About?

When we think of tuna, the first thing that likely pops into mind is the canned good you get from your local grocery store. With tuna arguably being the most important commercial fishing industry in the world, it’s understandable why many may overlook how much fun these fish can be for recreational anglers. If you’re looking for a deep sea fish that’ll put up a heck of a fight that could last hours depending on its size, then tuna is your best bet.

While marlins are famous for their jumps and runs when trying to escape being caught, tuna tend to use their weight and muscle to stay down. The result is a less visually entertaining spectacle than most billfish species, but the fight itself can often be more challenging. And yes, they make great table fare for anglers who enjoy eating what they catch, unlike billfish.

Tuna are a species of big game fish popular among anglers who enjoy going after ‘granders” – fish at least 1000 pounds. Though there are numerous subspecies of tuna that can grow over 300 pounds, only the Atlantic bluefin have been recorded to reach that hallowed 1000-pound mark.

Regardless, tuna fight well beyond their weight no matter the species. To get an idea just how big they can get, here is a list of some of the more popular tuna species anglers target, as well as their respective world record weight and location.

It’s not enough to just put your line in the water and ride your boat around waiting for tuna to bite. Like with any species, you’ve got to fish at the right time and place with the right gear. Below are some of the common tricks of the trade to catching tuna.

A 573-pound bluefin tuna, caught in June 2007, is a Virginia State Record.
The most common technique for catching tuna is by trolling, and that is because it simply outperforms any other method by a wide margin. It’s hard to argue with the success trolling can bring, but you can waste a lot of time with it if you’re doing it wrong. You could have the best looking presentation in the world, but it won’t mean anything if your trolling at a depth 100 feet too deep, or in waters with no fish altogether. Here are a few things to remember to troll successfully:

Letting the fish come to you or hitting a honey hole at the right time can be just as productive a technique as trolling. The risks are greater, however, because at least with trolling you have a chance to stumble upon a school of tuna. Not so with drift fishing. To ensure you’re not sitting there twiddling your thumbs hoping for a strike, here are a couple tips you should follow to yield better drift fishing result.

Your rod and reel choice will ultimately depend not only on the style of fishing you choose, but also the size of tuna you’re going after. Yellowfin tuna, for example, would require at least 25-pound test line, to as many as 50 pounds; a thick rod, capable of withstanding a heavy fight from a 400-pound monster; and a 50-pound class reel suitable for different trolling speeds. To help land a tuna, a fishing gaff is ideal for bringing larger sized fish into the boat that you intend to keep. Be sure to consult your local gear shop for the best advice for fishing in your area, as what works one day in one part of the ocean won’t work the same elsewhere.

Now that you know some proven techniques, it’s time to put them to the test. But where do you go?  In North America, there are tuna along much of the coastline in both the Atlantic and Pacific Ocean. You should do your best to read up on tuna fishing reports for your area to see when the fish are moving in and what lures people have been having success with. Many of these reports can be found online.

If you’re curious as to where the best spots to go tuna fishing are, then check out the six fishing spots below.

If you’re looking to catch the biggest tuna ever, than set your sights for the east coast of Canada, in particular the province of Nova Scotia. Late summer/early fall sees the biggest specimens move in along their migration route. While the tuna population has shrunk, it is back on the road to recovery and remains a popular fishery for anglers looking for a grander.

The Outer Banks are packed full with some great gamefish, tuna being one of them. Yellowfins and bluefins make their way through here in late spring/early fall.

Cabo San Lucas is another popular fishing destination in Mexico.

The Baja California Peninsula is a prime place for tuna, especially yellowfin, and not just because the world record was caught here. Thousands of fish make their way through this Peninsula, with the best fishing times coming in the late fall. Bigeye and skipjacks are also popular targets in Mexico.

Kona is more famous for its monster blue marlin, but the tuna fishing is a great second choice. Yellowfins and skipjacks are abundant here. It’s good tuna fishing all year round, but it peaks during the summer months.

Tuna can be found practically anywhere on the west side of the Atlantic Ocean, Florida being no exception. Unlike locations such as Hawaii or Nova Scotia, though, you have to travel well offshore a lot more to find the right hump that tunas love to swim around, often times as far as 10 miles or more.

Late spring/early summer means one thing to many Cape Cod anglers: giant bluefin tuna. Schools of them start coming in, all completely focused on eating. There’s yellowfin too, but catching a bluefin grander is what Cape Cod tuna fishing is all about.

6 Incredible Animals That Can Fish

The Worst Shark Movies Of All Time

How To Pick The Best Fishing Lodge

The Importance Of Good Shoes When Kayak Fishing