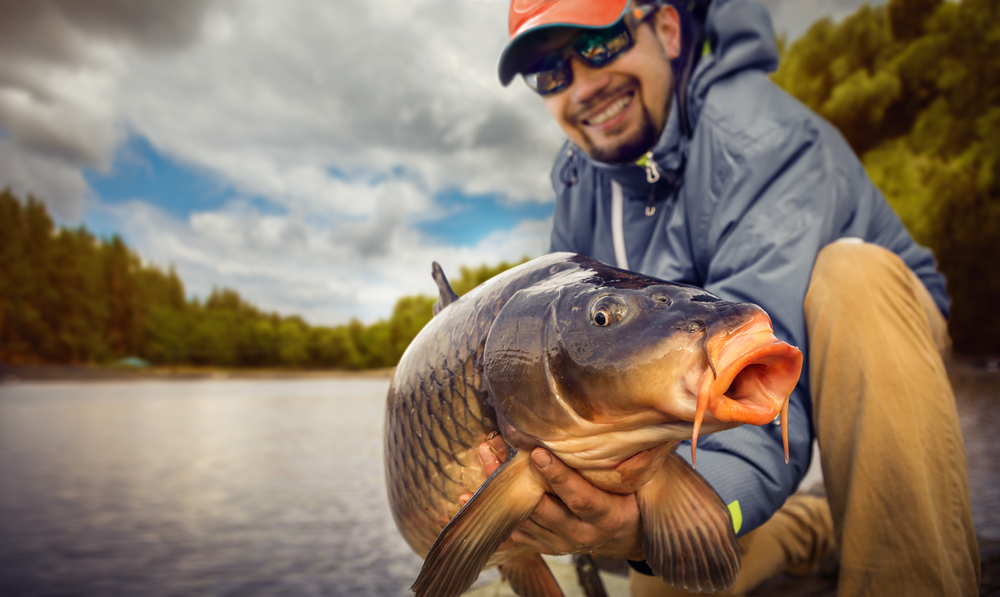 The carp family is one of the largest in the world of fish, containing around 100 unique species that are all mostly native to Europe and Asia. Some of the most widespread species are common carp, grass, silver, bighead, and crucian. For purposes of this section, the common carp will be the main focus as it is the most widespread of all.

Carp vary greatly in color and size, but all generally share either a similar sucker type mouth, eyes set in its head at a lower angle than most fish, and barbels (whiskers).The common carp has a light gold color, white underside, and has a long, orange dorsal fin and two pairs of barbels.

The biggest carp in the world is the giant barb, or Siamese giant carp, which inhabit only a select few river basins in Thailand. This fish can grow to be 10 feet (3m) long and weigh over 650 pounds (295 kg). The common carp can grow to be over 90 pounds (40 kg), though very rarely, especially in North America.

Carp can be found on every continent in the world except Antarctica.

Carp can adapt to many different habitats, but thrive in weedy, shallow, warm areas.

Common carp are omnivorous. Younger carp eat mainly plant material, such as seeds, while adults prefer water insects, snails, fish eggs, benthic worms, and plant parts. Carp are not very picky eaters as they have been known to eat garbage off the bottom of urban bodies of water. Its eating habits is the primary reason for its reputation as a poor food fish in North America.

Smaller carp are preyed on by predator fish such as walleye and northern pike.

Information courtesy of Minnesota Department of Natural Resources and USFWS.

What Is Carp Fishing All About?

If you want to understand carp fishing in any part of the world, the first thing you need to understand is that this is a truly worldwide fishing experience. People all over the globe love carp fishing and they will often go carping in the day or even try their hand at night carp fishing. This is one species that is fun to fish no matter when you want to go.

Carp are predominately freshwater fish, meaning there are very few fish in this very large group that will actually tolerate saltwater. Although there are several ornamental type carp, such as the koi or the common goldfish, other types of carp are used as a food source for people, which leads to different types of carp being located all over the world. In many area, such as North America, carp are considered an invasive species that was accidentally introduced into local rivers and streams.

Some baits that work well for big carp fishing are hot dogs, cheese, worms, corn, prepared dough baits, and boilies. Boilies are made from boiled combinations of fishmeal, milk proteins, bird food, soya flour and eggs. They come in many different sizes, flavors and colors, and many carp anglers make their own.

Carp feed by mouthing and ejecting their food before committing to swallowing it. For this reason, a hair rig is often used for carp fishing baits. It has a short line attached to the bend of the hook that holds the bait. This way, the carp can inhale the bait easily, and is hooked when attempting to eject the bait.

Chumming is an extremely effective method for drawing carp to an area and getting them in the mood to eat. Be sure to check local regulations to ensure that chumming is allowed. Common carp chum includes corn, flour, bird seed, fishmeal, dough, dog food, bread, or a mixture of any of these items. A scoop is usually used to through the chum into the water near your line.

How To Pick The Best Fishing Lodge

Getting Started with Saltwater Fishing